There was a shiny new addition to my Very Grown-Up action figure collection a few days ago. Actually, there were several. But although I’m delighted I now have a bookshelf resplendent with Jo Grant and the Brig, my heart belongs to the third figure in The Three Doctor themed trio: a Gel Guard.

This dude here, that I’m hiding behind: 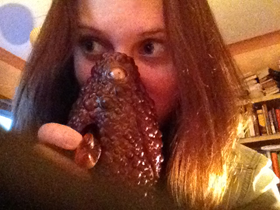 The Gel Guard is a smashing monster, but its charms are often overlooked by fandom. It’s Too Silly, you see. It’s not realistic, not a Proper Grown-Up Monster like the Very Serious Art Deco Robots or an alien Egyptian god stuck on his chair in a pyramid on Mars, or those roll-along bug-eyed pepper pots with tentacled cabbages stuck in em.

No, the humble Gel Guard is mocked. But just cause it looks like a giant diseased jelly baby and goes wibble-wobble as it, um, wobbles forwards doesn’t mean it isn’t scary. Its whimsical, even absurd, appearance is all the better for throwing its deadliness into sharp relief. And they’re damn frightening when you’re six years old. (No mocking! …I’m also scared by medium heights, compasses – the drawing circles kind  – and moray eels.)

And so the Gel Guard begins my list of the top five most underrated Doctor Who monsters: 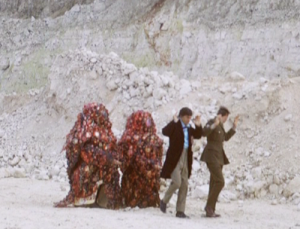 Okay, I admit that to my eye now, they look charming, by which I mean, slightly daft. But as a kid their blobbiness just meant they were More Scary. They have one giant eye! And they don’t talk! You only know they’re coming cause you can hear the most menacing of all possible wibble-wobble noises getting closer. And bullets can’t stop them… (And, yeah, that might be par for the course in the Pertwee era, but when you start firing bazookas at monsters, give yourself a hearty pat on the back at your awesome bazooka-shooting destructive power only for the smoke to clear and the wobbling menace to be even closer, it doesn’t do a half bad job at emphasising the indestructibility of these monsters.) You can’t even disarm them – they attack with a cool light-up claw (no light-up claw on the action figure sadly) that blows shit up. Then, and this worried me excessively when I was wee, they’re made of antimatter, so at any moment they might just blow up *everything*. (Yeah, they’ve been adjusted so they can exist in a matter universe but twas an evil mad genius what did it, and they’ve been known to make mistakes.)

Best of all, they only exist in the first place because the villain of the piece has willed them into existence. Of all the minions in all the universes that he could have chosen to create, he goes for one-eyed blob monsters armed with exploding claws. Bless. 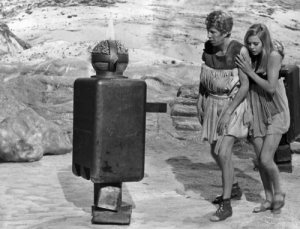 I watched The Dominators recently and am now of the view that it’s bloody good (go on, ask me how!) Marring this brilliance is the fact that it’s one episode too long and most of the cast are wearing curtains. One thing that very definitely isn’t doing any marring are the Quarks, adorable and deadly robots that are keen on blowing stuff up. Look at them! Aren’t they cute? They have soft, gentle voices, almost like children, but not in a….well, not *really* in a creepy way. Basically, what I’m saying is that they’re the Portal turrets of the Whoniverse. (If you haven’t played Portal, shame on you, it’s brilliant.) 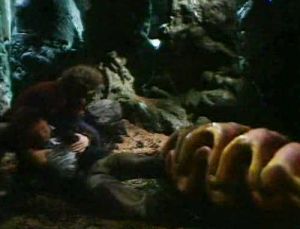 Oh, come on, it’s a clam and it’s GIANT. How is that not awesome? And it eats people! Or bites their legs, anyway. You know I had to be told that clams can’t move? I mean, obviously they don’t, but thanks to cunning camera trickery, I was convinced the Giant Clam did for, well, quite a while….actually, I still think it can move, shusht, it’s genetically engineered by a mad scientist, goodness sake. It’s probably got some shiny new moving part inside that shell that lets it rock side to side. 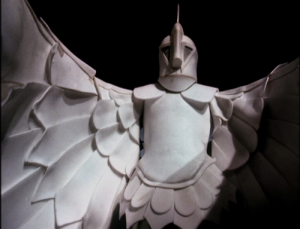 The Chronovore is ever so slightly hampered in its monstrousness by the fact that it looks almost exactly like a man dressed in a sheet flapping around on wires. I admit that. On the other hand it EATS TIME. It will steal your life and not in the fun Weeping Angel, yay, I get to go back in time way. Sure, later it gets round to eating people or leaving them in a state of living death or whatever, but that first attack in The Time Monster on poor old Stuart leaves him almost-but-not-quite aged to death. Death is common in Doctor Who, and it tends to be easy, instant, leaving those monsters who attack in more inventive ways than a quick laser blast looking that much more horrific. The Chronovore may look daft, but the look on Stuart’s face when he sees what’s happened to him does wonders to convince you a dude flapping around in an unconvincing bird suit ain’t a laughing matter. 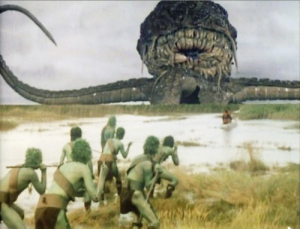 Poor old Kroll gets a lot of stick for looking a bit crap, but the ambition! Kroll is not a giant squid, Kroll is a SuperMegaGigantoSquid OF DOOM. Is it Who’s biggest monster? Yes, I think it is. If you were staging some manner Who monster deathmatch, you’d want Kroll on you team. Cause if you didn’t you’d lose. Yes, you would. Daleks vs Cybemen, who wins? KROLL DOES.

And, you know, if Character Options want to release any more of these dudes as action figures, I really really wouldn’t object.

In other news, the second episode of Verity! is now available for your listening pleasure where Erika, Deb, Katrina and Tansy discuss The Eleventh Hour and some other episodes of the Eleventh Doctor era, and Delia Derbyshire Day (she has a day now, hurrah!). Sadly, I’ve no idea if they say sensible things or talk complete nonsense, but I’m about to hit the play button to find out.