For my blogathon month, and not such a cheating post as yesterday, here’s a beautiful listicle of entirely sensible opinions.

So, the Original Series. Now, much as I wouldn’t call myself a Trek fan, mostly cause I can’t stomach the idea of being called a fan of TNG (I’m sorry, it’s a great show! Many people love it! I love many episodes and characters!, but I am okay with being a fan of the original series. Due to the fact it spends almost all of its time not being Tediously Beige and responding to every crisis by having a meeting in the conference room. There are many reasons for TOS’s lack of beige, but my favourite is the skill and dedication of the lighting people, who were Well Keen on their coloured gels and how they could use them to give a unique feel to their show. (I learned about this via the excellent books series To Boldly Go… which I very much enjoyed, so long as I skipped the author’s opinion of eps, cause there is forgiving and there is trying to make out Harry Mudd pimping women in space is CLASSIC AND AWESOME.)

Anyway, I grew up with TOS, in the VHS/repeats on BBC 2 way, since I mostly grew up in the nineties. And my love of it went on a U-curve, as when I was wee I was all “yay” and scared by And The Children Shall Lead… then I got older and discovered Feminism and Critical Thought and was all “boo!” and then I got even older, and was keen on context and appreciating the good shit in spite of the dubious stuff and was yay again. Which isn’t to say there isn’t a lot to sigh about in TOS. There is. There’s also a lot that delights me. Strictly speaking, it’s probably my second favourite Trek series. So, a Top 5!

(These are my favourites btw, which isn’t to say I think they are the best (otherwise I’d be listing the first half of season one, cause omg, the is some top telly – no other Trek show has managed that sort of consistent quality in its first season…or most of their runs really.))

This is one of my very favourite of all Trek episodes. There are Romulans in it. And a Romulan commander who is a woman, and she gives people orders and no-one patronises her. Joanne Linville’s performance is sublime and it doesn’t hurt that the she’s 40 years old at the time, one of the oldest female guest stars in Original Trek and a sensible age to be in command. (Also three years older than love interest Leonard Nimoy.)

Her interrogation scene with Kirk is AMAZING, and a perfect example of what a great character Kirk was. Here he is with a peer who’s on the opposite side of a cold war and, yes, he’s hostile but it’s still *respectful*. He knows that she is smart, capable, and worthy of her position. Now, one might be a bit judgey about the romance between the commander and Spock but WHATEVER. (I like it.) Sure, you can analyse it in terms of it being disappointing that one of the few female authority figures in the original series is interested in Spock. And that’s legit. But you’ve also got to look at the context, and contrast with the status of real life military women in the sixties. Romantic interest or not, the Romulan commander was also the captain of the Romulan Fleet’s flagship, and I don’t know about the Americas, but there wasn’t a woman in the British Navy in command of a warship until 2012.

Also, as I may have mentioned, there are Romulans. My very favourite Star Trek race and they are characterised marvelously here: sneaky clever space Romans for the win! (I do also very much enjoy the intergalactic espionage plot, and Kirk getting his Romulan disguise on.) 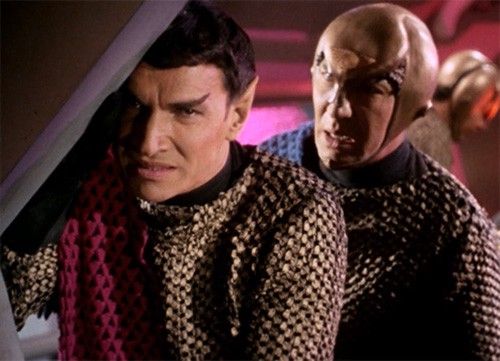 Guess what this episode has? ROMULANS. Yes, the other classic Trek episode that features the Romulans (The Deadly Years doesn’t count, nerds) is my second favourite classic Trek episode. I’d feel bad about it, if Romulans weren’t the best and also these actually are two amazing episodes.

This time our Romulan commander is played by the wonderful Mark Lenard (aka Spock’s dad) and it’s a tense, exciting story of submarine warfare in space. Again, there’s a compelling mutual respect between the two starship captains, and we get a fairly nuanced portrait of what kind of a civilisation the Romulans have.

This is the episode where Kirk and co pop into an alternate universe where the Federation are space fascists and Spock has a beard. I remember when I was a kid finding this episode particularly scary because it wasn’t just a matter of shooting or negotiating or whatever, THEY WERE TRAPPED IN ANOTHER UNIVERSE; that seemed quite the tricky problem to solve so I was very worried. Seeing the trapped landing party try to negotiate the cruel, sadistic world they find themselves in makes for top drama though.

And Uhura gets some excellent scenes. There’s her awesome confrontation on the bridge with Sulu, and her moment of vulnerability with Kirk where she admits she’s scared, and he shows both support and leadership in response. And she takes full part in the fisticuffs, hitting beardy Spock along with the rest of the team and finally ending the fight giving Kirk a big pot to smash over Spock’s head.

Space diplomacy! Yay! The Enterprise carries a bunch of ambassadors to a conference! Exciting stuff, eh? (If you’re watching for *drama* there’s a sodding murder to keep you happy.) Oh, there are Andorians and Tellarites and Vulcans and they are all being snappy and annoyed at each other and getting this sense of scale and complexity of the Federation is a marvellous thing.

Also this is the episode that introduces us to Spock’s parents, Amanda and Sarek, both so beautifully written and with such a deep, believable relationship (that is v sixties in terms of gender roles but I still ❤ it). There are some truly gorgeous moments, the best being Amanda confronting Spock and demanding he help his father and Spock refusing; the other Spock’s chillingly matter-of-fact statement that if Sarek wanted to, he would be quite capable of murdering someone. Way to dump your Dad in it, Spock.

This was the very final episode of the original series, where Dr Janice Lester, somewhat consumed with jealousy, swaps bodies with Kirk so she can be captain of the Enterprise.

Now, it is *possible*, if you’re a Trek fan, you might frown slightly at this choice what with this being regarded as one of the most misogynistic episodes that Trek’s ever had. And, yes, that’s a perfectly understandable interpretation: Lester is driven by rage and jealousy, we get some top lines like Lester “despises her own womanhood”, “your world of starship captains doesn’t admit women” (Which, yes, can be read in a different way, but the scriptwriters have said they meant No Women Captains; thank God for ENT retcons); “believe me, it’s better to be dead than live alone in the body of a woman” says Lester, and good ol Scotty joins in with, “I’ve seen the Captain feverish, sick, drunk, delirious, terrified, overjoyed, boiling mad. But up to now I have never seen him red-faced with hysteria.” And the very last line of the series: “Her life could have been as rich as any woman’s. If only… if only…”

So, why is this one of my favourite episodes? Two reasons: I adore a good female villain, and despite the misogyny directed towards her, I love Lester: she’s a mad scientist driven by ambition and revenge to steal her former lover’s body and nick his starship. That’s some good stuff, at least to me.

More importantly is the lens through which I saw the episode, and which is still there for me as an adult. As a kid, I didn’t watch this and end up thinking “gosh, I guess I can’t captain a starship then”, or “oh, being a woman is a terrible thing”, what I got was that Captain Kirk could be a woman. And she would be every bit as smart, capable, and compelling as a male Kirk (kudos to Sandra Smith for her amazing performance). And when you’re a wee kid watching a 40 year old male-dominated series that was a pretty awesome thing to get out of it.

3 thoughts on “5 Favs of Star Trek The Original Series”