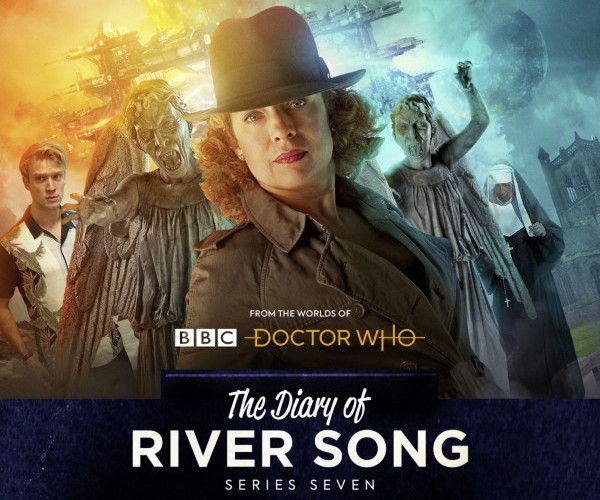 So excited to wake up this morning and discover that The Diary of River Song Series Seven is out! It seems forever since I wrote it, and it’s such a thrill to know it’s finally out in the world. It also remains utterly bizarre to me that I *wrote words* that *Alex Kingston* acted, and she’s only playing one of my most loved characters in the entirety of Doctor Who.

As you might guess from the title of the story, it’s set in an abbey. That abbey’s in medieval England, and River’s pretending to be a nun. As you do. The brief was for a murder mystery, and given the whole of time and space to play with my instant thought was of Cadfael (there’s also a fair The Name of the Rose influence), a show I love and adore and may have watched slightly too much.

I was thrilled when I read the cast list, and saw that Roz from Bugs aka Jaye Griffiths was the main guest star. I *adored* that telly series growing up, and while I’ve seen her in a bunch of things since (including telly Who!) she will always be Roz from Bugs to me. I’m also really excited, and a wee bit intimidated, to listen to the other stories by Roy Gill, James Kettle, and James Goss.

The Diary of River Song is one of my “must listen” Big Finsh series and getting to contribute to it has been absolutely amazing. Huge, huge thanks to everyone at Big Finish for all the amazing work you do, and for letting me be a part of that. Most especially thank you to Matt Fitton, for being such a brilliant and kind editor. Bless you!

The Diary of River Song is available to buy now at the Big Finish website on CD and Download.

One thought on “Abbey of Heretics is out!”