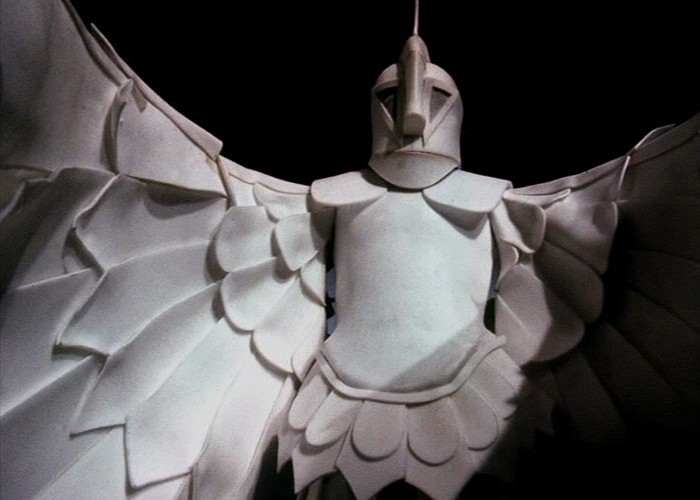 Oh, I’ve been meaning to do a Gally (Gallifrey One, the greatest Doctor Who convention in the world) report for, uh, two months now? A long time anyway. In my head it was a beautiful thing, detailed, and effervescent and lengthy. I think I’m going to manage one of those things. For this post will be guided by the photos I managed to take whilst in California. 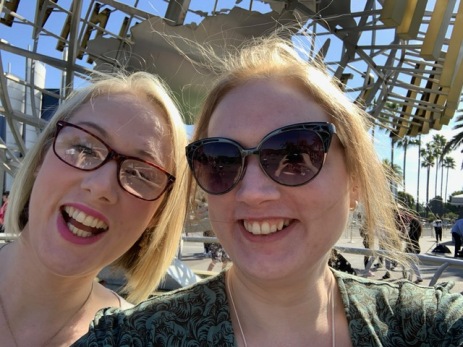 Me and my sister! I convinced her to come to Gally last year, and she loved it, so she came back this year. We’re at Universal for the day, and it was fun both for theme park-iness yay, but also getting to spend some quality time with sis. 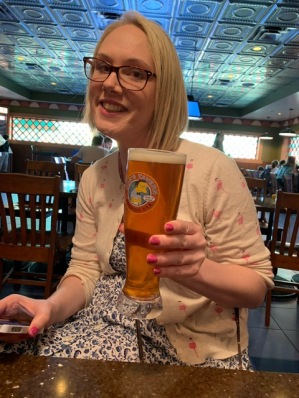 We went to Moe’s! In Simpsons land. Where we were carded, cause clearly we are nineteen years old and not women in our thirties. So much great theming in the park! It’s not Disney level theming, but it’s still v pleasing. 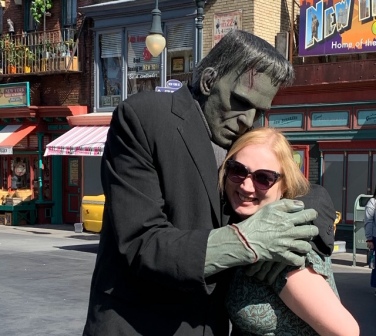 I am not a taking pics with characters person, but LOOOOOK. Frankenstein’s monster!! (Also there was a tiny little bit of Universal monsters merch, and that was where I spent all my money.) 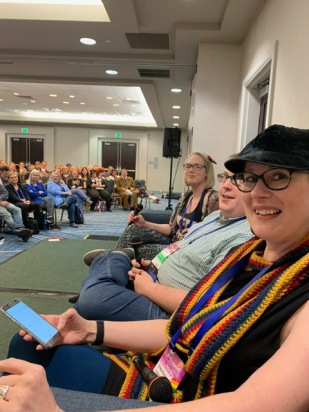 Verity podcast panel game! (In Defence Of, where you have to defend terrible things for a minute and then the audience votes with claps on who wins). I tried so hard to convince sis to play, but she said she was too nervous, and then in the middle of the panel she was “no! I can do this!” Very proud. 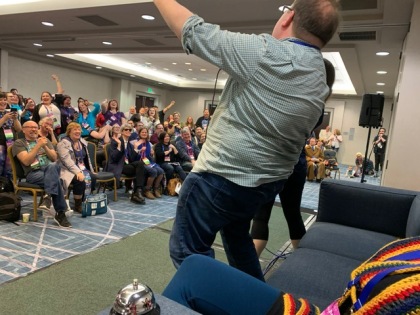 This panel was also the place where The Greatest Convention Moment Ever happened. It was like actually being in a musical, except it was Real Life. In the final round of the game we had two truly amazing players. So witty, so smart, so damn sharp. WHO WOULD PREVAIL? Tom Dickinson of The Moment podcast ended up singing Hamilton song while changing the lyrics to Doctor Who-ish ones on the fly. HOW COULD THIS BE BETTERED? His opponent (I’m so sorry, I’ve forgotten her name) picked up the challenge by going for a Wicked made Doctor Who-ish number; and she could *sing*. And then she brought Tom in to join in and then the audience were on their feet and singing and it was AMAZING. I had feelings, everyone had feelings; there were a hell of a lot of feelings. 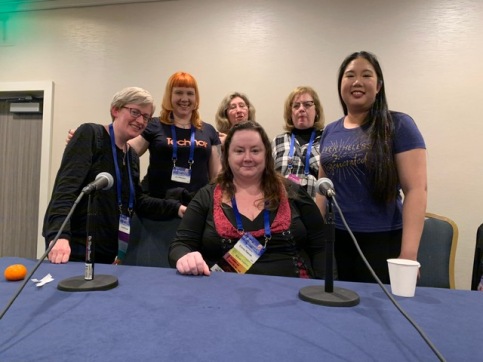 This was an *amazing* panel with *amazing* people. What was it about? Excellent question, I can’t remember. DON’T JUDGE ME. It was brilliant, that’s why I took a pic.

In the TARDIS Talks symposium (run by Joy Piedmont and Paul Guest), Rachel Donner was magnificent, delivering a fascinating talk on Jewishness and Doctor Who. 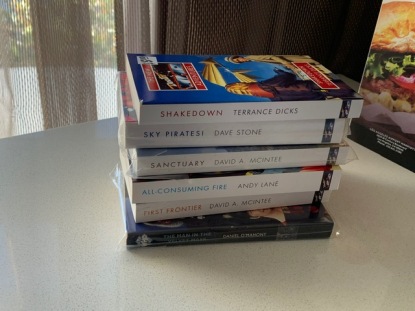 Loot! For the first time in so many years I remembered my list of missing Who books, and picked up a few. This pile was bought for the princely sum of $20. 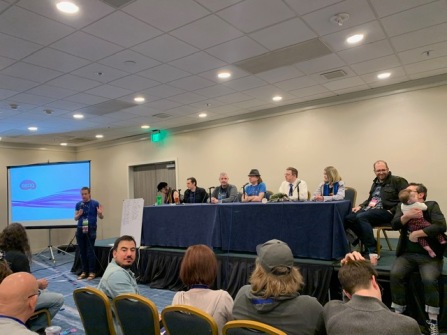 This was Paul Cornell’s regular What Is the Best Doctor Who Thing panel. This year it was Producers and Script Editors. Obviously the correct answer was Verity Lambert. Who won? Excellent question. Can’t remember (this is why you shouldn’t wait two months to write a con report). It was the wrong answer though, that’s the important thing. Also Erika BETRAYED the Verity! podcast by voting against Verity lambert. It was a very sad moment and we had to fire her. 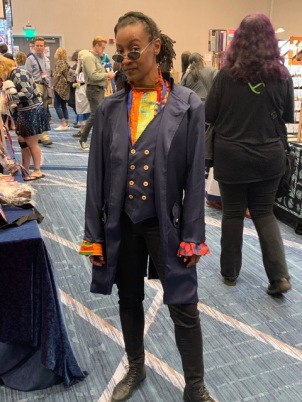 Ahhh! Look at this magnificent cosplay! The glasses are what make it for me. THAT LOOK. It’s so perfectly what this Doctor gave us onscreen. 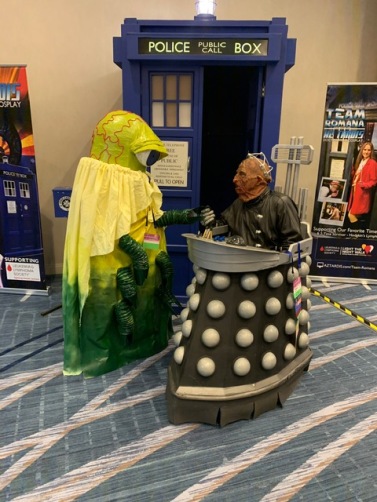 I was very dignified when I saw the Alpha Centauri costume. And isn’t the Davros one *amazing*? 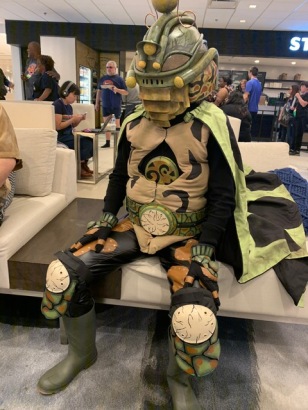 OMMMMMEEEEGGAAA! Is it better than what we actually got in Arc of Infinity? QUITE POSSIBLY. 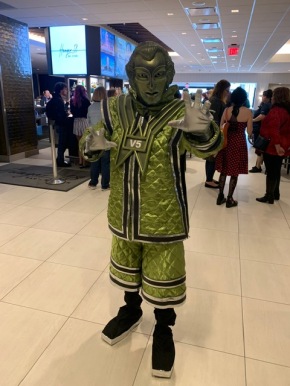 I mean, come on, how perfect is this? 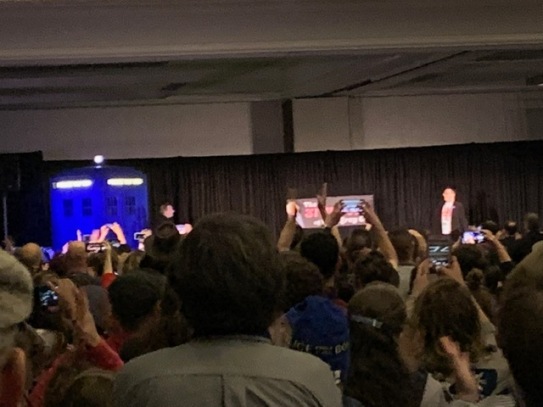 Yes, it’s a terrible pic, but you can just about see Steven Schapansky and Christopher Eccleston. STEVEN INTERVIEWED HIM. It was amazing. 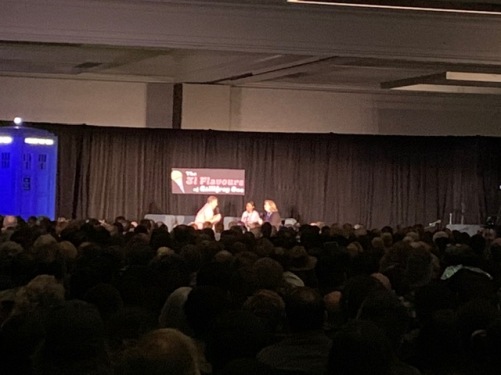 And then the next day Deb Stanish and Tai Gooden interviewed him. It was amazing too! (Con goers were asked to only attend one, but it was okay to come in if there was room; I was ten minutes late and standing at the back, in case I am being judged by anyone for breaking the honour rules.)

Really, so many friends did brilliant things at this con, but I confess seeing these folks up there, saying words at Eccleston was the most incredible. 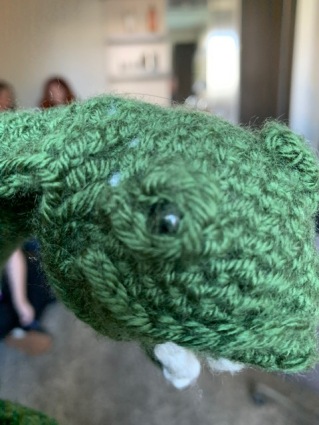 A Skarasen! I was making wee videos of him as our room gathering viewing of new Doctor Who was being set up. I forget who knitted him, I’m so sorry, but he was beautiful. 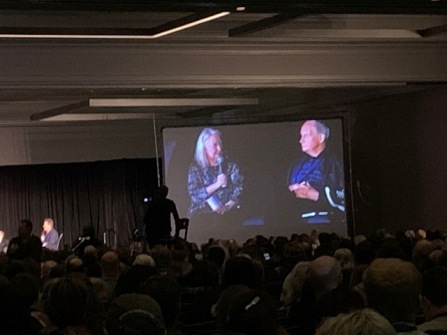 This was the very final panel of the con, and I took this terrible pic because I wanted to remember that in a v tricky panel (for there are like 12 guests up there) these two people chatted about their memories of working on Fury from the Deep. 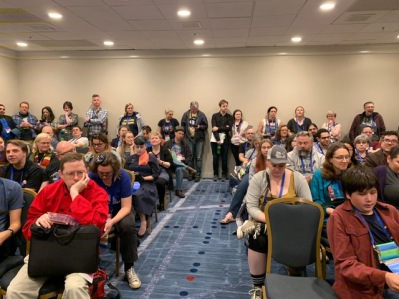 This was the Verity! panel where we are just there and talk to the audience. Standing room only! I find this bizarre, I confess, as we’re a fan podcast and there is so much awesome stuff going on elsewhere. But it’s very lovely that so many turned up and listened to our nonsense. 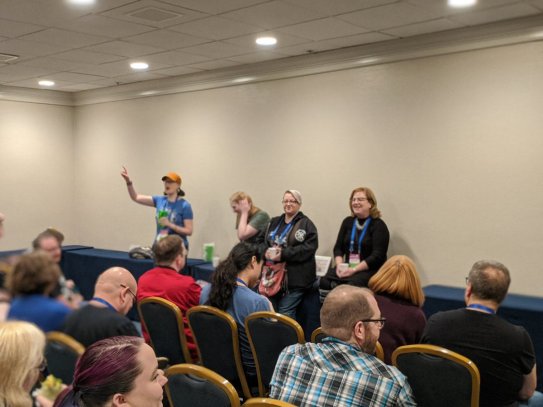 The Verity! panel from the other side! (Pic by Annette Wierstra). Erika was either being terribly mean or terribly nice. That is my reaction to either thing. 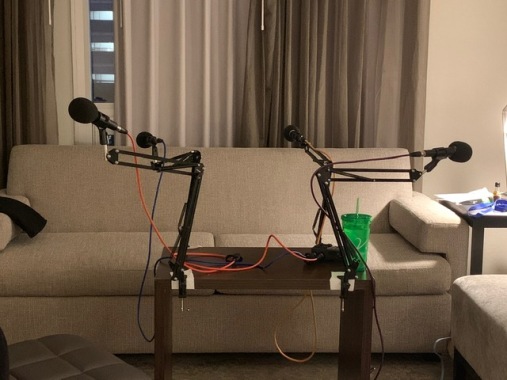 The awfully fancy looking set up provided by Erika and Steven for podcast recording. We’re about to sit down for Verity! and for the very first time I wasn’t practically falling asleep! (Yup, I did excellent self-care through con.) 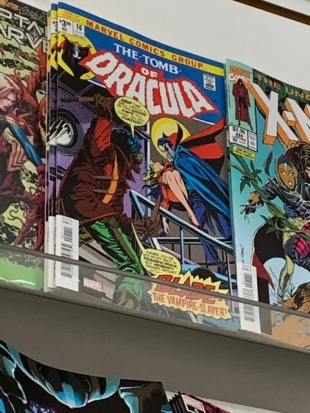 And that was Gally 2020! When we were able to go outside and mingle and travel and all that lovely stuff. It feels so long ago.