Released! Into the wild! Like a herd of Daleks…or Quarks! (Everyone loves the Quarks, right?) 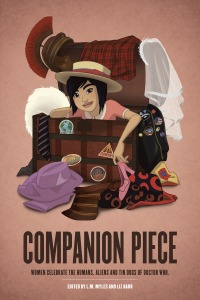 Anyway, yes, the Table of Contents for Companion Piece is now out, and here it is:

• The Impossible Girls by Deborah Stanish
• That Nitro-9 You’re Not Carrying: Violence and the Companion by Seanan McGuire
• Scheherazade and Galahad in an Exciting Adventure with the Daleks by Mags L. Halliday
• Steven Taylor, Space Adventurer! by L.M. Myles
• Scintillating, Fascinating, Irritating by Liz Barr
• I Don’t Want Her to Go by Amy Gaertner
• “What a Splendid-Looking Roman You Make!”: The Male Companions, from Ian to Rory by Emma Nichols
• A Different Way of Living by Julia duMais
• We, Robots by Erika Ensign
• The Damned Don’t Cry by Sarah Groenewegen
• Stories and Fairytales: Feminism, Agency and Narrative Control with the Pond Family Women by Karen K. Burrows
• The Shakespeare Race Code by Amanda-Rae Prescott
• “I Can Do Your Part If You Can Do Mine”: Romana II as the Girl Doctor by Gwynne Garfinkle
• Mouth on Legs by Tehani Wessely
• From “There’s Nothing Only About Being a Girl” to “The Most Important Woman in the Whole of Creation”: Feminism and the Female Companions by Linnea Dodson
• Where in Eternity… is Josephine Grant Jones? by Joan Frances Turner
• Forever Playing Second Fiddle: How Sarah Jane and the Rest of Us are being Sold Short by Nina Allan
• The Barbara Strain by Lynne M. Thomas
• The Curious Case of Miss Victoria Waterfield by Jennifer Adams Kelley
• “Where Do I Fit In?”: The Tale of Perpugilliam Brown by Stephanie Lai
• My Doctor: Harry Sullivan by Sarah McDermott
• Donna: Noble by Name and Noble by Nature by Karen Miller
• Rewriting History with Sticky Notes: Narrative, Agency and Bernice Summerfield by Emma Ward
• Scientists, Not Office Boys: Zoe and Liz, Science-Heroes by Anna Livingston
• The Uses of Turlough by Anne Goldsmith
• Amy‘s Choice: Doctor Who Companions and the Nightmare of Domesticity by Una McCormack
• The Ones He Leaves Behind by Foz Meadows
• Science Princess FTW by Mary Robinette Kowal
• Origin Story by Aneira Vaughn
• What Has Romana Ever Done For Us? by Phoebe Taylor
• The Heroine of Her Own Story by Britany Harrison and Liz Barr
• Sara Kingdom Dies at the End by Tansy Rayner Roberts
• A Question of Emphasis: The Doctor as Companion by Amal El-Mohtar

Tis a cunning mix of professional and fan writers with all sorts of things to say on the humans, aliens and tin dogs that accompany the Doctor in his travels; a plethora of thought-provoking, exciting, fun, nostalgic, omg-now-I-have-to-watch-all-of-Doctor-Who-at-once essays that, by turns, make you look at the companions anew in all sorts of wonderful ways, air-punch with yay, or attempt to hug your entire Doctor Who DVD collection at once…that may just be me. Shusht, I’m a totally well-adjusted human person, promise.

But it does look just a little bit awesome, yes, and, having read the thing quite a few times, I can also tell you factually that it is, in actual fact, awesome. So very proud of this book, and the work done by all the contributors, and my marvellous co-editor Liz Barr.

Mags L. Halliday also has a fab essay on her blog accompanying the announcement, about being female fans, and the complexities involved in countering gender bias.

The print version of Companion Piece is available for pre-order at All Major Book Retailers (here’s Amazon and Barnes & Noble), and the ebook can be pre-ordered on the Kindle or Kobo.

And if you’re coming to Gallifrey 2015, there should be advance copies on sale at the Alien Entertainment table.

One thought on “Companion Piece Table of Contents Released”