It’s my Mum’s fault I love Doctor Who. As the show was off the air for most of my childhood, without her maternal influence I might never have discovered just how brilliant it was.

I always find Mum’s perspective on Who interesting, or as she would more likely put it *annoyingly* interesting. I managed to convince her that, yes, actually the perspective of a female fan who’s watched Doctor Who from the very start *is* worthwhile, would you mind if I asked you a few perfectly lovely questions about what you think of the show.

Naturally, she was thrilled. Ahem.

She knows a little bit about online fandom, as I talk about it too much, and I wanted to know if she’d be prepared to go online and tell anyone who was using “I’ve been watching Doctor Who since 197-something” as a way to bolster their argument that there were very silly, and she’d been watching since 1963 and, yes, had actually seen every single episode, haha you will never know the true joy of The Myth-Makers but I do.

She said no. “I’ve no interest in doing that.”

Alrighty. How about how we just talk about when you started watching Doctor Who? “I saw the very first episode, twice, and have been watching it ever since…it was a different, exciting sort of programme…sometimes the make-up left a bit to be desired, not what I thought as a child, it looked fine then. They did very well with what they had.”

So you were old enough to appreciate what was going on? “Yes.” And how old were you? “No. Age is banned.”

One of the big things that helped keep Doctor Who on the air in the early years were the monsters, any memory of those?

“The Daleks, of course, the cushion-hiding monsters. I didn’t hide behind any cushions, but your uncles did…what always amazed me was the Daleks going through those deserted cities [in The Dalek Invasion of Earth].”

What about monsters that *did* scare you, any of those?

“One of the early ones that definitely sticks in my mind are those tick-tock toy soldiers coming after them in The Mind Robber. Very strange and scary. It was completely different from anything I’d seen before, insidiously creepy. The Ice Warriors’ first story was frightening; the way they hissed. Autons were scary. Very effective turning an everyday thing into a killing machine.”

Do you think the Autons coming out of shop windows and massacring people was a bit too much for children? “Not compared to what they can see in computer games nowadays.” I ask if this is a dig at that one time I let my niece watch me playing Dead By Daylight and got into trouble from my sister. “It might be.” Thanks, Mum! 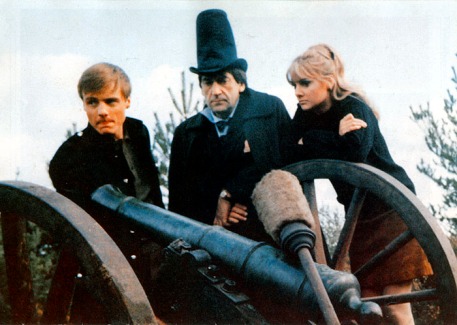 How about your first regeneration, any memories of what it was like when Hartnell turned into Troughton? “This sage old grandfather figure turned into a clown; a strange, quick-witted man with a recorder. I found the recorder irritating.” Any regenerations a bit tricky? “I don’t get as emotional as you, but I did think when Davison turned into Colin Baker they’d made a mistake.” And now? “Oh, he’s fine now. You get used to a new Doctor. I couldn‘t take to Sylvester McCoy at first either. It took me ages to find some sort of rapport with him. And Ace I found strange at the time, but I can appreciate her now.”

We move on to chat about favourite companions. “I quite like Jamie, but he could be excitable. You don’t like the companions I like best; I enjoyed Adric, Nyssa, and Tegan. They had unusual names and their own little team, and idiosyncrasies.”

Now, I didn’t get to see any of the classic series on broadcast, I was too young. But the age of the VHS was upon us, hurrah! I ask Mum why she inflicted Doctor Who on me as a child. “I only bought you a video! And you liked it. It made getting presents for you easy.” When did you think I’d grow out of Doctor Who? “I never thought you’d grow out of it, mind you I never thought it was going to take over your life. Thank goodness it wasn’t something detrimental.”

Moving on to the mid-nineties, the Paul McGann TV movie appeared. “Liked it! Liked Paul McGann. Quite a dishy guy.” Is he the Doctor you’d most want to travel with? “Oh, definitely. He had a decent looking outfit as well.”

In 2005, the new series started with Christopher Eccleston and Billie Piper in the main roles, any memories of that first season? “Eccleston and Piper worked very well together. Love the one with Harriet Jones, she was great. And politics! That was right up my street.”

We talk about her favourite scene from the first series: the dancing at the end of The Doctor Dances: “The classic Doctors would never have danced to Glen Miller…maybe Sylvester McCoy.”

And what about the New Series generally, any favourites, enjoyed it as much as the classic one? “I’ve liked all the new Doctors. Amy’s my favourite companion, she’s feisty and strong-minded.” So nothing to do with her being Scottish? “The Scottishness just adds to the genius.” That sounds like something I’d say, I tell her. “Oh dear.”

Excitingly, I learn something new about my Mum! She’s a bit of a Moffat fan. “I found Moffat’s episodes really good. I started to pay attention to who was writing the stories and looked out for his name. Some of the ideas he brought in were a breath of fresh air. I rarely found a Moffatt episode I didn’t like.”

Now, Jodie Whittaker is the new Doctor. Any feelings about her being cast? “No, because I hadn’t a clue who Jodie Whittaker was.” Yes, but a woman as the Doctor, what do you think? You were pretty excited about there being a female captain in Star Trek [big Janeway fan], no similar feelings for the new Doctor? “It’s not like Trek where there’s a new character in a new series. Each time Doctor Who regenerates there’s a process where you miss the last Doctor, and start to get to know the new Doctor. I expect the same thing to happen here. I’m pleased it’s a woman, but there’s still the same emotional journey you have with every Doctor.”

Thank you for being so patient with me! Are there any final thoughts you have about Doctor Who you’d like to share? “Have you seen Bradley Walsh’s wee face? He’s absolutely over the moon; he was watching Doctor Who fifty years ago too. I wish it was me that was going in the TARDIS.”

One thought on “Women Have Always Watched Doctor Who (Or, I Asked Mum A Few Questions About Being a Fan Since 1963)”