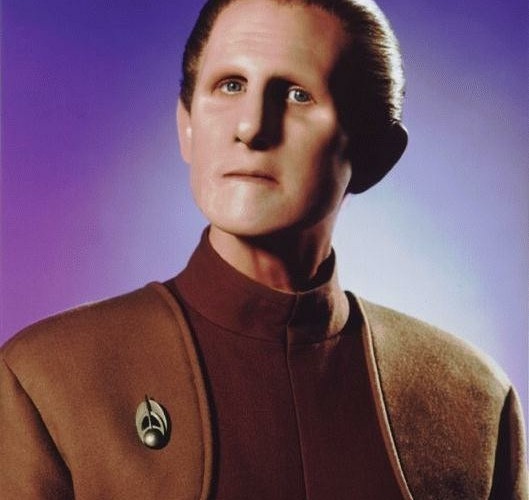 I always find it a bit weird to be so saddened by the death of someone I don’t know, even though it makes perfect sense: just because you don’t know someone doesn’t mean they can’t affect your life, bring you joy, inspire you, give you comfort. They’re still a part of your life, and when a part of your life is gone forever of course there is sadness, grief, mourning.

It’s strange what deaths hit you the most. When the news broke on December 8th that René Auberjonous had passed away, it was like a gut punch. It wasn’t just that he was part of my favourite Trek, he was a part of my childhood. He was part of the joy I associated with Boston Legal, he was someone who’s name in the credits would lift me up a wee bit as I knew he’d be giving a damn good performance.

And in all the convention vids I’ve seen, all I’ve heard about him from those who met him, he seems to have been a thoroughly decent, warm, thoughtful man.

So, in celebration of him, I want to share some of the very finest moments of Deep Space Nine, which alos happen to be moments where René Auberjonois is absolutely brilliant.

In Facets, we discover a fascinating aspect of Trill culture that lets the cast have a lot of fun as they protray the past hosts of the Dax symbionts. And none of them is as much fun as Odo embodying Curzon Dax. Unlike the ‘solids’, when Odo takes on the persona of Curzon, it’s a little more complicated than being voluntarily possessed for a few hours: it’s actually a merging between Odo and Curzon.

After hearing so much about Curzon Dax over the past few years, actually having him sort-of appear and played by one of the main cast seems hugely risky. As a viewer you’ve built up an image of this man from the reminisces of Jadzia and Sisko, what if he’s just rubbish in person?! But he’s not. He’s perfect. And you know it from the first moment of his first scene with the most wonderful delivery of “Benjamin!”

Every scene between Odo and the ‘defective’ Weyoun 6 in Treachery, Faith and the Great River is great stuff. Seeing the the beginnings of a new relationship forming, hinting at the possibilities of what could come, and then to have it snatched away in a deeply moving death scene is some excellent telly.

Weyoun, even this Weyoun, believes Odo to be a god. When it looks like they’re both going to die, he sacrifices himself to save Odo. As he dies, he asks for Odo’s blessing. Odo, of course, doesn’t merely not think of himself as a god, he hates the idea, hates being treated as one. And yet, beautifully, he still honours Weyoun’s last wish. 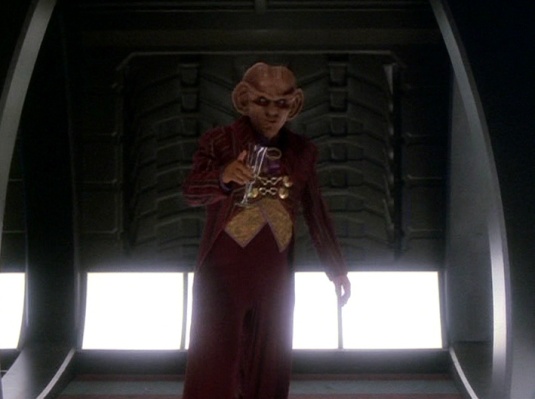 A Final Goodbye to Quark

Of all the double-acts in Trek, Odo and Quark is one of the very best. Every scene they’re in together is a joy of writing and the talents of Auberjonois and Armin Shimmerman. That they’re both doing such engaging, often hilarious, work under rubber masks makes it even more impressive. Now, to be honest, O’Brien and Bashir is my fave double-act of DS9, but Odo and Quark was the first one I fell in love with. I even remember the moment: season 1, Babel. Only Odo and Quark are left to save the station, and it’s glorious.

So after over seven years of rivalry, snark, tricksiness, and schemes, Odo returns to the Great Link. I recall how much I was anticipating their final moment in What We Leave Behind; how they could *possibly* make it good enough?

But they did. And it was *perfect*. After all that time together, what does Odo have to say to Quark at the end: nothing. Not even a goodbye.

But it’s such an affectionate nothing, and Quark knows it.

Climbing A Mountain With Quark

Is The Ascent a great episode? No. Is it a joy to see Odo and Quark stuck on a freezing planet, injured, and struggling to survive with only each other to rely on? Yes, yes it is. A lot.

It’s difficult to pick one moment from what is a box of Quark-and-Odo chocolates. Is it Odo trolling Quark by smacking his lips while eating? His reaction to Quark snaffling the only survivial suit? Getting increasingly pissed off at Quark counting steps? Panic as he thinks Quark’s dead?

I think, all things considered, it’s Odo’s awkward realisation that Quark isn’t getting put on trial as a part of the Orion Syndicate, he’s a witness against them. And *then*, in response to Quark’s mockery, he’s a total asshole at Quark for not having the money to get into the Orion Syndicate. AND THEN his reaction to Quark’s “well you’ve spent your life trying to get me, so who is the bigger failure???” is a little bit OH but also you were just a total ass Odo, you deserved that!

Damn, they are just SO GOOD together.

This is supposed to be moments, but it’s impossible to pick just one from the sublime two-parter The Die is Cast/Improbable Cause, so I’m going to cheat and talk about two.

Both are with the ridiculously good Andrew Robinson, playing Garak, one of DS9’s very, very best characters. After Garak’s shop’s blown up, Odo investigates. Eventually he comes to the realisation of who the real culprit is: “You blew up your own shop, Garak!” he exclaims. It’s a darn fine moment, but Auberjonois’s delivery makes it SO GOOD. Like, I still get tingles every time I watch the scene.

The second is…more than one moment, never mind..it’s the terrifying interrogation scenes between Garak and Odo. Here, Auberjonois takes Odo from confident and contemptuous, mocking the idea of being tortured (hey, he’s a shapeshifter) crumbling into fear and anger when he discovers Garak has a device that can prevent him shapeshifting. Unable to return to a liquid state to regenerate, he begins to waste away. Garak *begs* for him to tell him something, anything. When Odod finally does, it’s heart-wrenching, and every bit as disturbing as it is brilliantly performed.