Because it’s Doctor Who’s fiftieth birthday this year there are going to be STAMPS. Lovely stamps from the Royal Mail who’re making one for each Doctor with the space vortex on them and the Doctor’s head coming out of it to EAT YOUR FACE.

(That’s not true. Except for Tom Baker.)

Also there will be four second class ones and they say they will have the Doctor’s most notorious enemies on them, but only mention Daleks and Cybermen. So I’m hoping for Gel Guards and Quarks. And obviously will be complaining bitterly if they have not chosen so wisely.

Anyway, in order to celebrate EXCITING DOCTOR WHO STAMPS, I made my own. Which I think everyone should tell the Royal Mail about and suggest they add them to their Doctor Who releases cause it would totally make them darker and grittier and edgier and as I learned from Battlestar Galactica, everything is better when it has more dark and grit and edge. And I might scare the shit out of some people who would be like “Wtf? Why is there a MELTING FACE on my electricity bill? WHAT IS WRONG WITH THESE PEOPLE?!”

So here are my amazing ideas: 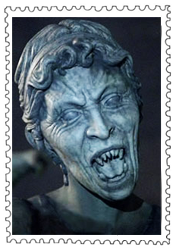 Well, obviously. And I’m not saying I screamed at Blink, but I might have.

I PROMISE THIS IS PG-RATED. Kane’s face melting in Dragonfire (McCoy era, season 24, the season that is just too jolly and full of fun for some fans to deal with….yeah, that’s the season with THIS FACE in it.) Kane’s melty face is like that that bit with the wee alien eels in The Wrath of Khan: it scared the crap out of me when I was wee so now I can’t ever watch it again.

THIS IS REALLY SCARY, OKAY? It’s a dude called Quill and he’s POSSESSED by FOAM, FROM THE SEA. It’s one of the only surviving clips from Fury from the Deep and IF YOU WATCH IT YOU WILL NEVER USE BUBBLE BATH AGAIN. I say watch, I mean listen to the audio, and possibly watch with the mostly not moving pictures. BUT IT’S STILL CREEPY.

Also, I don’t have a picture, but there should be one of that time Tom Baker got strangled by a cabbage I mean Dalek. Cause that was both scary *and* hilarious. WINNING COMBO.

Really I should be in charge of all the stamps.

2 thoughts on “I would make the best stamps”