So the loch I try and have a daily run by is still frozen over, and some of the swans have taken to investigating the land. And this cygnet came up to me making ridiculously cute noises – I’d no idea swans had cute noises! And I snapped a few pics. (Mummy swan was not far behind and she was far less cute and much more “hissss – away from my child, human!” to which I quickly obliged.) 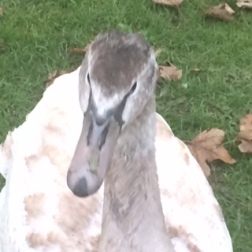 Also, new vid up today of another classic DOS game, Castles 2: Siege and Conquest playthrough. I LOVE THIS GAME. Also, it’s probably responsible for my love of siege weaponry and much other medieval nonsense. It’s ridiculously good for the time (1992), with politics, plots, castles, and a well-judgey Pope to contend with as you fight it out with a bunch of other noble houses for the throne of France.

If you have any DOS games you’d rec, let me know! I’ve a fair old list, but am always happy to try something new. And I love talking about awesome older games. Computer games are such weirdly ephemeral media. The great plays, and novels, and paintings, and such will get restaged and reprinted and replicated, but the great computer games, even of just 20 years ago get forgotten. Which is such a shame.