I am sleeping so badly this week. And I know part of it’s down to ridic anxiety with the world at large. Not even mental health related anxiety, since I really don’t think it’s irrational to be anxious given the daily news of what’s going on. As my dear friend Deb Stanish put it on the Twitters “… And yes, it’s a cliche, but it’s the biggest truth I know: Be a light in the darkness. So have a piece of #%@&^ pie.” I assume she means fucking pie and not shit pie, cause no-one wants shit pie. And also the pie is pecan or cherry or even apple and not bloody pumpkin pie, the monster of pies. Not the good sort of monster. The bad sort. ANYWAY, in that spirit, I’m going to try and do a regular blog post on Fridays of Yayful Things I’ve done or seen during the previous week.

1)  My YouTube gaming channel – I started making gaming vids. For it is most yayful and fun and I love talking about gaming but don’t really get a chance to do it all that much. My gaming friends are people what I game with and only game with, and that’s less about gaming chat and more about loot and killing stuff to get more loot. So, yes, this is me nattering away as I play some games. At the moment it’s a playthrough of Skyrim Special Edition, Dota 2 games where I’m trying to improve (I suck, but so much less than I used to; I now feel merely medicorely bad rather than stupendously bad), and classic DOS games from my childhood (also taking requests!). Please do take a look and subscribe if that’s your sort of thing!

2) Verity! talks animated Power of the Daleks – This week’s Verity! is a discussion of the brand new Power animation, and it was awesomely fun, and gosh, I bloody love Power of the Daleks. It’s such a good story. Top quality Who, and I hope more people get the chance to enjoy it now as the animated version is vastly more accessible than the audio or the recon.

3) Michelle Yeoh is a new Trek captain – So, despite not being a Trek fan, ahem, I am quite looking forward to the new Trek show. I’m not sold on the new movies, and having grown up in the Golden Age of Star Trek, I really miss having it on the telly. And the first bit of casting news out of the box is AMAZING. Michelle Yeoh. And then it turns out she’s playing a captain in the new show. I’ve also read that the star isn’t the captain this time but another character (who’s also a woman) which is fine. I care not. Michelle Yeoh. Who is AMAZING. Who is far, far better than we deserve tbh, and she’s going to be there, captaining. And don’t forget female captains are still relatively rare in the Trekverse. There’s only ever been a handful onscreen. And this is sufficiently good casting news that no matter what other nonsense comes out before we get to see the actual show, I am going to be totally rooting for it. Michelle Yeoh, people.

4) Margaret Hamilton, she who led the team that coded the software that got Apollo 11 to the Moon, has been awarded the USA’s Presidential Medal of Freedon.

5) This picture (it’s actually a few weeks old, but it is my favourite one I’ve taken of my local loch…those are starlings, I *think*): 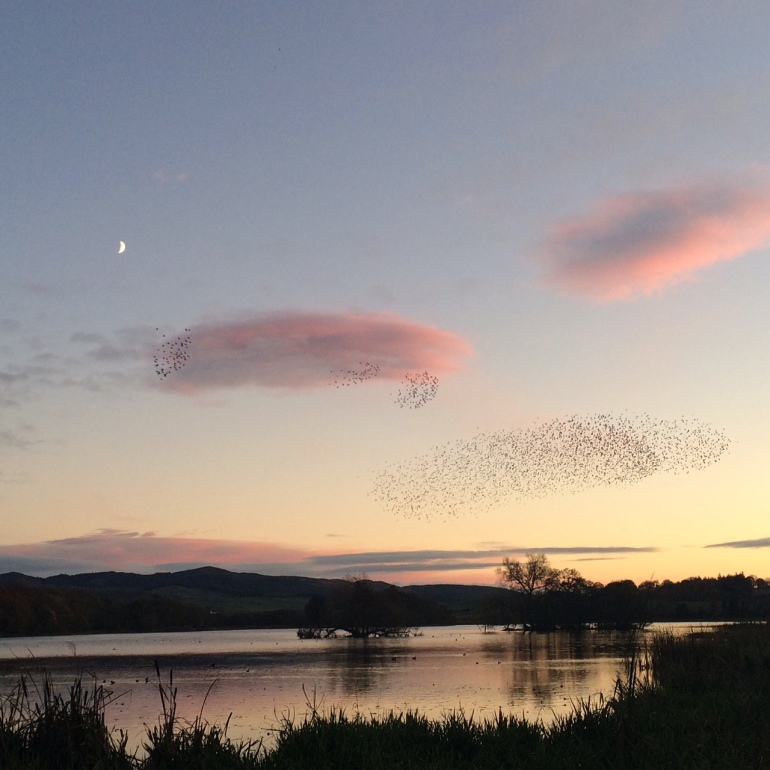 Despite it being actually freezing, I’m still going out running. Yesterday the loch was frozen over, and the poor local birdlife seemed rather put out at their home being suddenly solid. Also robins have arrived! From somewhere! I hadn’t seen any until this week, and now it’s impossible not to spot a few every day. If pretty rural Scottish scenery and swans, so many swans, are your thing, that’s what my Instagram is entirely composed of.

6) We’ve recorded new Down and Safe! So if you’re missing your fix of tasteful Blake’s 7 commentary a new episode will be with you this Thursday coming.

7) My sister, niece and nephew are doing a Jingle Jog for Parkinson’s UK. Nephew is but a year old so Quite The Challenge for him, but I’ve been assured he will be walking the whole way. If you can spare a pound or two for a good cause, please do consider sponsoring her.

8) There’s been a stupendous archeological discovery in Egypt, a new city! Over 5000 years old! Amazing stuff.

9) Though not QUITE as amazing as the NASA report released about the electromagnetic propulsion drive, which could be capable of taking us to Mars within 70 days. To sum up “it works, but it shouldn’t”. Which is awesome. And totally not giving me Event Horizon vibes. If I was in charge of stuff, we would be building a GIANT ONE anyway, and seeing what happens. Nothing could possibly go wrong. Probably.

10) I’m trying to talk myself out of buying this even though it would clearly be a very sensible practical purchase.

Ten is a very good round number. I shall stop there, and wish ye all a happy weekend!

One thought on “Friday Flail of Yay”